Would you like to switch to the accessible version of this site?

Don't need the accessible version of this site?

These days we hear a lot about environmental toxins, yet most people still aren’t fully aware of the real damage they cause or how much we are actually exposed to them. And when it comes to vaccines – perhaps the most insidious source of debilitating toxins – the medical and pharmaceutical establishments continually mislead us, the government is completely negligent in monitoring our safety.

In essence, the pharmaceutical companies are allowed to police themselves and no follow-up is ever done to see how or if those studies are actually carried out.

MISSTATEMENTS AND UNTRUTH’S ABOUT VACCINES

While the government gets tens of thousands of complaints about vaccine-related health complications, the truth is that less than 10 percent of all cases – even serious ones – are ever reported. That means that the real numbers are almost surely in the hundreds of thousands or even millions of complications.

Yet ever year the Centers for Disease Control and Prevention (CDC), the media, and drug companies offer a parade of promotional ads extolling the virtues and safety of vaccines. These ads are obvious frauds. 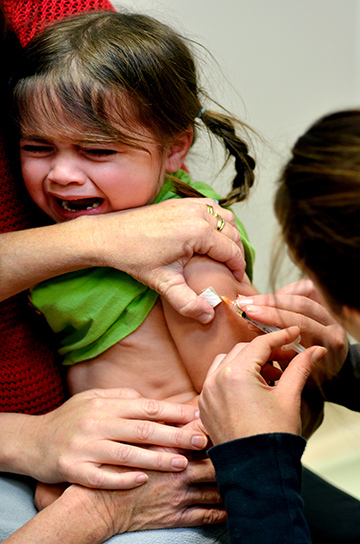 In fact, one of the most careful studies ever conducted showed that the flu vaccine had no benefit in reducing mortality or hospitalization rates or in preventing pneumonia in the elderly – three of the main reasons the CDC gives for getting a flu shot.

It is, however, associated with deadly conditions such as Guillain-Barre ascending paralysis.

Yet that vaccine continually generates billions of dollars for its manufacturers.

THE HIDDEN AGENDAS BEHIND VACCINATION POLICIES AND PROGRAMS

Pharmaceutical companies virtually control medical education and the private practice of medicine by a number of clever tricks that influence doctors:

These companies use all of their power and influence to convince the public and medical practitioners that alternative methods of medical care are not only useless, but also dangerous.

They began using these tactics when they realized the public was seeing that alternative treatments such as nutritional supplements actually work – and can even remove the need for expensive medications.

It wasn’t always this way. When I was a child, we received just three vaccines: pertussis, polio, and smallpox.

There were no vaccines for measles, mumps, or chickenpox. Like my friends, I contracted most of these minor illnesses and got over them, and have had lifelong immunity, which the vaccines cannot provide.

But statistics can be, and often are, falsely interpreted. Medical journalist Neil Z. Miller has carefully researched the data on childhood deaths during the “scary” days of unvaccinated children in the U.S. He’s uncovered some surprising facts.

Why were the death rates from these childhood diseases falling so rapidly? While pro-vaccine elements – the government and Big Pharma – take credit for that decline in death rates, the truth is much simpler.

Better nutrition and sanitation, especially in big cities, account for most of the improvement in death statistics.

This information has been noted in health literature for many years, but has been widely ignored.

When it comes to the flu, there is a long-held myth about how it spreads. Most of us are taught that flu spreads in crowded places, such as schools, hospitals, and shopping malls.

However, one study found that cold temperatures and low humidity played major roles. The spread of infection was greatest at 41 degrees and at a humidity of 35 percent or less.

Keeping your office, home or other sites warm and humid actually prevents the spread of flu. This has nothing to do with vaccines.

THE HISTORY BEHIND THE INCREASE CANCER RISKS WITH POLIO VACCINATIONS:

For example, few in the general public are aware that the polio vaccines used during the 1950s and 1960s were contaminated with a cancer-causing virus called SV40. It is estimated that more than 100 million people worldwide were infected with this virus.

When this story broke in the 1960s, vaccine manufacturers initially assured the public that the SV40 virus was harmless to humans. Yet they knew from the work of Dr. Bernice Eddy at the National Institutes of Health that SV40 caused cancer in primates.

To this day, vaccine defenders say there is no problem with the SV 40 contamination. Nevertheless, studies led by Dr. Michele Carbone have conclusively shown that this virus is responsible for a number of human cancers, including bone cancer and mesothelioma (a cancer that affects the protective lining covering many of the body’s internal organs)

One study involving 58,000 women found a 13-fold greater risk of brain tumors in those vaccinated with the contaminated vaccine.

Other, more recent studies of vaccines have found even more of them to be contaminated.

In one study, 60 percent of the vials were contaminated.

One of the viruses found in the vaccines was the pestivirus, which is associated with miscarriages. In addition, viral fragments, including DNA, RNA, and proteins, have been found in some vaccines.

A number of studies have shown that viral and bacterial fragments can become incorporated in other microorganisms, creating entirely new viruses and bacteria. Some result in dementia and degeneration of the brain.

Pharmaceutical companies have long known that fear can drive people’s decision-making. Take, for example, the campaign to convince the elderly that if they do not get their yearly flu shot, as well as a pneumonia vaccine, they face a high risk of death.

We are seeing a gradual decline in our children’s ability to learn, which closely parallels the advent of mass vaccination programs. Children are now receiving as many as 40 vaccines before attending school.

The elderly are also at great risk from vaccinations. The flu vaccines contain a full dose of mercury (as thimerosal) as well as dangerous immune stimulators called adjuvants.

Virtually all neurodegenerative diseases, such Alzheimer’s disease and Parkinson’s disease, are trigged and worsened by chronic brain inflammation.

As we age, our brains become progressively more inflamed. But in some people, the inflammation is severe. These are the unfortunate people who will develop neurodegenerative diseases.

Repeatedly vaccinating people who are over age 55 will make the problem worse. To date, more than 150 vaccines are being proposed during a person’s lifetime. This plan is pure idiocy.

More importantly, we now know that the age-related immune suppression observed in the elderly is not caused by aging itself, but by nutritional deficiencies.

We also know that correcting these deficiencies will help restore immunity, which gives people much better protection than vaccination. The same is true for younger people.

I find it ironic when public health authorities encourage those with a chronic disease – such as heart disease, pulmonary disease, or cancer – to get a yearly flu shot. These people already have impaired immune systems, and in many cases they will not be protected by the vaccine.

What they need is nutritional supplementation and advice on a healthy diet.

When the chickenpox vaccine was added to the regular vaccination schedule, preventing large numbers of children from contracting active chickenpox, doctors began to see a tremendous rise in the number of cases of adult shingles, especially in the elderly.

Today, 1 million cases of shingles (herpes zoster) are reported in the United States each year. About half of the cases of this incredibly painful condition occur in patients 60 or older.

It turns out that the practice of vaccinating children against chickenpox reduces parents’ and grandparents’ immunity and makes many of them more susceptible to shingles.

Many adults who are old enough to have avoided the chickenpox vaccine, according to recent studies, carry the live chickenpox virus in their spinal ganglion. When this virus, which normally is dormant, becomes active in the elderly, it can cause shingles.

What protects these adults from shingles is being repeatedly exposed to children with the active natural virus. But vaccinated children are less likely to get chickenpox, and the adults around them do not experience the protective rise in immune function.

Proponents of the chickenpox vaccine have admitted that the vaccine caused the increase in shingles. What was their solution? They created a herpes zoster vaccine – and, of course, made millions of dollars in the process.

Dr. Badanek helps patients with brain health in Ocala and soon in Tampa Bay. He prides himself in treating patients that are searching for the answers to their prescription issues and refuse to give up. Many of his patients present with a variety of chronic conditions: hypothyroid, heart disease, diabetes, gastritis, irritable bowel, constipation, autoimmune disease and numerous other issues. To schedule an appointment in Ocala call 352-622-1151, 727-501-5997 in Tampa Bay or email [email protected] for a consultation.

Send Us An Email Today!

Find us on the map

Find Out When We Are Open